The Political Compass Website-Test where you are Left/Right

"Welcome to The Political Compass"
Interesting test on this website.

There's abundant evidence for the need of it. The old one-dimensional categories of 'right' and 'left', established for the seating arrangement of the French National Assembly of 1789, are overly simplistic for today's complex political landscape. For example, who are the 'conservatives' in today's Russia? Are they the unreconstructed Stalinists, or the reformers who have adopted the right-wing views of conservatives like Margaret Thatcher ?
On the standard left-right scale, how do you distinguish leftists like Stalin and Gandhi? It's not sufficient to say that Stalin was simply more left than Gandhi. There are fundamental political differences between them that the old categories on their own can't explain. Similarly, we generally describe social reactionaries as 'right-wingers', yet that leaves left-wing reactionaries like Robert Mugabe and Pol Pot off the hook.
That's about as much as we should tell you for now. After you've responded to the following propositions during the next 3-5 minutes, all will be explained. In each instance, you're asked to choose the response that best describes your feeling: Strongly Disagree, Disagree, Agree or Strongly Agree. At the end of the test, you'll be given the compass, with your own special position on it.

Just a few propositions to start with, concerning - no less - how you see the country and the world.
SOURCE: http://www.politicalcompass.org/index 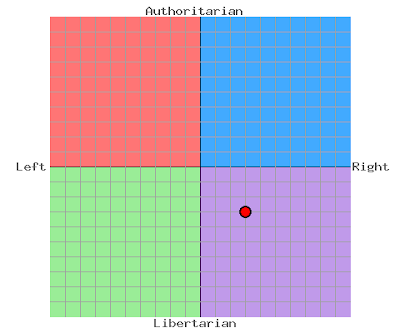 Posted by noachbenavraham at 7:33 PM