The Flight 93 memorial is a terrorist memorial mosque, Part 1: It points to Mecca. 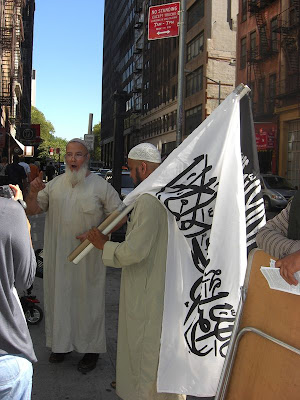 Video begins with Tom Burnett Senior's appeal to the American people to please help stop the Park Service from planting a giant Islamic shaped crescent atop his son's grave. The half-mile wide crescent, originally named the Crescent of Embrace, points almost exactly to Mecca. That makes it a mihrab, the Mecca-direction indicator around which every mosque is built. (Some mihrabs are pointed arch shape, but the archetypical mihrab is crescent shaped.)

A second typical mosque feature is the 93 foot tall Tower of Voices, which as Mr. Burnett notes: Looks like a minaret, and has a crescent on top. These and a host of other Islamic and terrorist memorializing features all remain completely intact in the so-called redesign.

The design is called the Circle of Embrace now, but according to the Park Service's own website the circle is still broken, and in the exact same places as before. The unbroken part of the circle, what symbolically remains standing in the wake of 9/11, is still a giant Islamic shaped crescent, still pointing to Mecca.

Posted by noachbenavraham at 6:01 AM