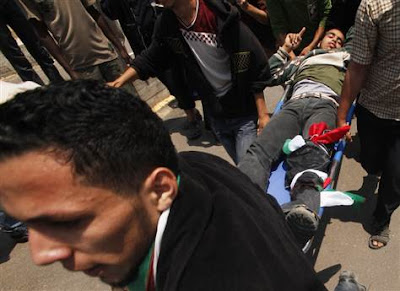 Visit msnbc.com for breaking news, world news, and news about the economy

"Meanwhile, the Facebook generation is increasingly taking a lead in the Palestinian arena, at times sidelining political veterans stuck to more traditional ways.

"There is a new energy, a new dynamism," said Hanan Ashrawi, a former Palestinian negotiator. "The Palestinians feel they have put themselves on the map again."

Sunday's marches occurred on the day Palestinians mourn Israel's 1948 creation, when hundreds of thousands of their people were uprooted and scattered throughout the region.

Marking the anniversary, called the "nakba," Arabic for "catastrophe," Palestinian organizers bused hundreds to Lebanon's border with Israel and to the Syrian frontier in the Israeli-held Golan Heights. Surprised and overwhelmed, Israeli troops fired to keep the crowds from breaching the borders. Four Palestinians were killed in the Golan and 10 in Lebanon, while a 15th was fatally shot as dozens rushed Israel's border wall with the Gaza Strip." (more)

Posted by noachbenavraham at 2:27 PM No comments: