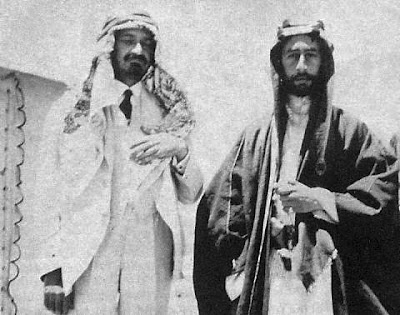 Emir Feisal I (right) and Chaim Weizmann (also wearing Arab dress as a sign of friendship) in Syria. At this time Feisal was living in Syria not Iraq.


The PROPAGANDA website Avaaz feeding misinformation to students, asking them to be part of testing NEWS BLACKOUTS* in oppressive countries like Syria, Libya and Egypt. Pro-Palestinian hogwash**!
*

"While the black-out on the Internet intensifies Egypt, Avaaz and its partners have worked to send material receiving satellite internet organizers on site. Now, Bahrain and Libya are trying to implement their own crackdown on internet - and we have the ability to provide decisive support to derail the blackout. Communications equipment and technical support teams will help the organizers to disseminate information to local rallies, get in touch with other activists in the region, and provide information to the world in case of power. All this will provide a vital counterbalance against the propaganda of the regimes in place, and a form of protection to the demonstrators who will benefit from more media coverage and attention."

"In days, the UN Security Council will meet again to discuss whether Palestine should become a new state**. But key countries are still unsure how to vote.

Our campaign for Palestinian independence is on fire, and our voices are reaching leaders. But we need to ramp up the pressure and many people don't feel they understand the situation well enough to take action. Avaaz has made a short new video that tells the real story of the conflict."

On April 25th, 1920 the Supreme Council of Allied Powers met in San Remo, Italy to decide the future boundaries of the Middle East. Although none of the overall boundaries have been altered since then, many false arguments have arisen in opposition to these firmly established precedents.

The 1920 decision of the Supreme Council of the Principal Allied Powers, Britain, France, Japan, Italy (with the US not present but in full agreement) is legally binding to this day.

In light of the looming unilateral declaration of Palestinian Statehood before the United Nations General Assembly next month in New York, the 1920 San Remo Conference must be fully taken into account.

After World War I, the Allied Powers designated final borders for the conquered countries with the San Remo Agreement. Agreement which was originally ratified by 51 countries and gives Israel complete rights to annex all of Palestine.

Chaim Weizman, a Jewish leader who became the first President of the State of Israel described the San Remo agreement,

"[T]hat recognition of our rights in Palestine is embodied in the treaty with Turkey; and has become part of international law. This is the most momentous political event in the whole history of our movement, and it is perhaps, no exaggeration to say in the whole history of our people since the Exile. [The decision of the Supreme Council of the Principal Allied Powers] crowns the British declaration by enacting it as part of the law of nations of the world."

TEXT OF THE FAISAL-WEIZMANN AGREEMENT
(3 January 1919)

His Royal Highness the Amir FAISAL, representing and acting on behalf of the Arab Kingdom of HEJAZ, and Dr. CHAIM WE1ZMANN, representing and acting on behalf of the Zionist Organisation, mindful of the racial kindship and ancient bonds existing between the Arabs and the Jewish people, and realising that the surest means of working out the consummation of their national aspirations, is through the closest possible, collaboration in the development of the Arab State and Palestine, and being desirous further of confirming the good understanding which exists between them, have agreed upon the following Articles:

The Arab State and Palestine in all their relations and undertakings shall be controlled by the most cordial goodwill and understanding and to this end Arab and Jewish duly accredited agents shall be established and maintained in their respective territories.

Article II
Immediately following the completion of the deliberations of the Peace Conference, the definite boundaries between the Arab State and Palestine shall be determined by a Commission to be agreed upon by the parties hereto.

In the establishment of the Constitution and Administration of Palestine all such measures shall be adopted as will afford the fullest guarantees for carrying into effect the British Government's Declaration of the 2nd of November, 1917.

All necessary measures shall be taken to encourage and stimulate immigration of Jews into Palestine on a large scale, and as quickly as possible to settle Jewish immigrants upon the land through closer settlement and intensive cultivation of the soil. In taking such measures the Arab peasant and tenant farmers shall be protected in their rights, and shall be assisted in forwarding their economic development.

The parties hereto agree to act in complete accord and harmony in all matters embraced herein before the Peace Congress.

Any matters of dispute which may arise between the contracting parties shall be referred to the British Government for arbitration.

Given under our hand at LONDON, ENGLAND, the THIRD day of JANUARY, ONE THOUSAND NINE HUNDRED AND NINETEEN.

Provided the Arabs obtain their independence as demanded in my Memorandum dated the 4th of January, 1919, to the Foreign Office of the Government of Great Britain, I shall concur in the above articles. But if the slightest modification or departure were to be made [sc. in relation to the demands in the Memorandum] I shall not be bound by a single word of the present Agreement which shall be deemed void and of no account or validity, and I shall not be answerable in any way whatsoever. 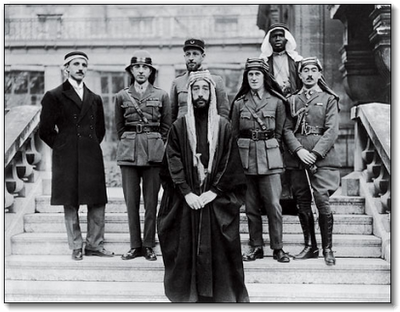 Posted by noachbenavraham at 11:31 AM No comments: