CNN Crescent News Network. "God's curse on them for generations."

ANDERSON COOPER, HOST: So you are optimistic for this election? You think, no matter who the Republican candidates are, you think Obama is going to win?

BILL MAHER: Oh, definitely. My money is still on Mitt Romney. And I think he's going to get the nomination. And then I think Obama is going to beat him like a runaway sister wife. Yes, I do.
COOPER: Oh geez.
Oh geez is right.
Not catching the reference, I Googled "runaway sister wife" and found that Billy Hallowell over at the Blaze had written about this earlier:
[T]here’s a popular television show on TLC called “Sister Wives.” The program, which documents a polygamous family’s lifestyle, is controversial to say the least. Maher’s mention, which is particularly striking considering that polygamy is forbidden by The Church of Jesus Christ of Latter-Day Saints (in fact, the practice would cost one his or her membership in the church), seemed to be a dig at Romney’s faith.
At the very least.
Now contrast this purposeful obtuseness to this:
A sister wife is an obscure reference to Mormon polygamy. So Cooper knows all about Mormons when it comes to slandering Romney, but apparently not a thing about Islam. when it comes to a triple murder. Hmmm
"God's curse on them for generations.  ... They betrayed Islam."
"May the devil shit on their graves. Is that what a daughter should be? Would a daughter be such a whore?" --Muslim dad who honor killed his three daughters and wife.
"I would do it again 100 times," said Mohammad Shafia, who murdered his THREE daughters in honour killing for dating the wrong boys. CNN just did an entire report on the Shafia honor killings, noting that "interrogations of the family never uncovered a motive." Mohammad Shafia, however, declared that his daughters' betrayal of Islam was his motive.
These are the lengths the dhimmedia will go to in its self-enforcement of sharia. CNN, the  Crescent New Network.
AFDI/SIOA will be hosting the first-ever human rights conference dedicated to exposing the plight of women under Islamic law in Dearborn, Michigan on the anniversary of the honor murder of Jessica Mokdad: the Jessica Mokdad Human Rights Conference. We’ve named the Conference after her as part of our ongoing campaign to raise awareness and bring a stop to the phenomenon of Islamic honor killing. These girls have rights, too, they’re human beings, and yet they’re completely forgotten in our politically correct culture, in which speech that is offensive to Islam is increasingly forbidden. We’re standing for the human rights of girls like Jessica Mokdad. Join us, fight the islamization of America and fight the dehumanizaton and diminishment of women.
CNN's deceit on the motive of the Shafia is a crime against women and humanity. 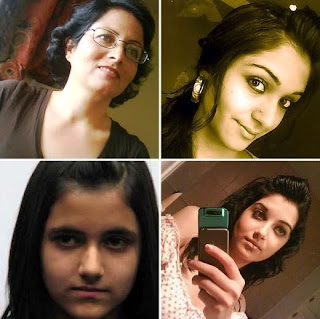 On June 30, 2009, Mohammad Shafia, with the help of his wife Tuba and his son Hamed, murdered his three daughters and his other wife in Ontario, Canada. The wealthy Shafia family worked quickly to conceal their actions, staging a car accident and weeping for their daughters. The media rushed to support the grieving family, until evidence showed that the girls' deaths were no accident.

Yesterday, CNN posted a video about the murders, noting that "interrogations of the family never uncovered a motive." Indeed, the closest CNN comes to identifying a motive in the killings is when the reporter says that the Shafia family comes "from a very conservative Afghan background."

Yes, it's the family's Afghan background, rather than some other background, that is most relevant to this case. At no point in the video does CNN use the words "Islam" or "Muslim."

This is all the more disturbing when we consider that Mohammad Shafia himself, in a recorded conversation, identifies his daughters' betrayal of Islam as his motive for the killings. He declares:


Shafia was so confident that his actions were justified, he had absolutely no remorse for killing his daughters:

"God curse their generation, they were filthy and rotten children."

"To hell with them and their boyfriends, may the devil shit on their grave."

“Even if they come back to life a hundred times, if I have a cleaver in my hand, I will cut (them) in pieces.”

Yet CNN remains puzzled about Shafia's motive. I assume CNN is also puzzled about whyMuslims commit 91 percent of the world's honor killings. But there's a difference between (a) being puzzled due to ignorance of Islamic teachings, and (b) willfully concealing the stated motive of a group of murderers. By deliberately leaving Islam out of the equation, CNN has joined in the cover up.

It is certified by Al-Azhar University as a translation that "corresponds to the Arabic original and conforms to the practice and faith of the orthodox Sunni Community...":

Here is the certification in Arabic:

Note that this Sharia manual also garners respect in the USA. Dr. Alan Godlas, Associate Professor of Religion at the University of Georgia, calls it a "carefully translated manual of the proper practice of Islam (shari'a) according to the Shafi'i madh'hab. It has been an essential book in the library of any serious English speaking Muslim or scholar of Islam since its publication in 1991."

In Book O, titled "Justice," in section 1, "Who is Subject to Retaliation for Injurious Crimes," section o1.1 reads, "Retaliation is obligatory ... against anyone who kills a human being purely intentionally and without right...":

However, o1.2 clarifies (above) that "The following are not subject to retaliation" and then lists — after the lovely, egalitarian "Muslim for killing a non-Muslim" and "Jewish or Christian subject ... for killing an apostate" — "(4) a father or mother (or their fathers or mothers) for killing their offspring, or offspring's offspring":