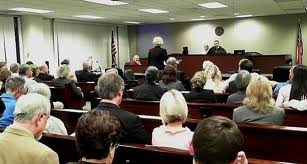 The mainstream media appears to have been put under a “cone of silence” about the first court proceeding to enter into the record evidence that Barack Obama is ineligible to be president based on the Constitution’s requirement that that office be occupied only by a “natural-born citizen.”


Georgia administrative law judge Michael Malihi on Thursday heard evidence from a variety of witnesses on why the president’s name should not appear on the Georgia state ballot for the 2012 election.

Earlier in the month, the judge had issued a subpoena for the president to appear before his court to answer challenges to his eligibility as a candidate.

Georgia law permits the secretary of state and “any elector who is eligible to vote for a candidate” in the state to challenge the qualifications of any candidate.

Michael Jablonski, attorney for Obama, attempted to have the subpoena quashed, arguing that taking the time to appear would “interrupt [Obama's] duties as president of the United States.”

While Thursday’s hearing was taking place, Obama was speaking to a group of UPS workers in Las Vegas, one of the states where he hopes to gain a vote advantage in the November election.

Following the judge’s refusal to drop the subpoena, the president’s lawyers stated they would ignore the subpoena and not participate in the proceedings.

Later, appearing on the Rachel Maddow show, Mike Berlon, Georgia Democratic Party chairman, defended the president’s actions, saying the case was much ado about nothing.

“This has been thoroughly and richly litigated for a long time, and every court that has looked at it has determined that the president is a citizen,” he said.

It is also the first time arguments have been made that the president is ineligible based on his own statements.

The presidency is unique among all of the constitutionally held offices in that it requires the person holding the position to be a “natural-born citizen,” not just a typical citizen of the U.S.

While the Constitution does not define the term “natural-born citizen,” many constitutional experts define it as the offspring of two citizen parents. The argument is supported by a U.S. Supreme Court decision from 1875, Minor v. Happersett.

The ruling, which is one of the few cases addressing the issue of natural-born citizenship as opposed to a naturalized citizen, states:

The Constitution does not in words say who shall be natural-born citizens. Resort must be had elsewhere to ascertain that. At common law, with the nomenclature of which the framers of the Constitution were familiar, it was never doubted that all children born in a country of parents who were its citizens became themselves, upon their birth, citizens also. These were natives or natural-born citizens, as distinguished from aliens or foreigners.

Based on this standard, the birth certificate released by Obama proves he is not eligible as his father was a non-citizen who came from Kenya.

The hearing Thursday produced a wide range of evidence from experts testifying that the president’s birth certificate was a forgery to issues with his Social Security number, which does not match the president’s name in e-verify.

Regardless of political persuasion, a sitting U.S. president openly defying a court subpoena for a hearing at which evidence indicating he’s a usurper is entered into the record is newsworthy.

However, a look at mainstream media websites shows an almost total blackout.

CNN, ABC, CBS and NBC did not run any coverage on Thursday’s hearing, with the exception of some local affiliates in Atlanta. The Fox News Channel’s report was a day later.

WND contacted the news organizations asking for comment on why they did not believe the story was newsworthy, considering the precedents set in the hearing. At the time of this article’s publication, none chose to respond.

The Atlanta Journal Constitution was one of the few newspapers to cover the event; however, its coverage did not discuss the ramifications if the judge were to rule Obama ineligible to appear on the ballot.

The media blackout of the Georgia case is part of a continuing pattern of covering up serious discussion of the birth certificate issue.

During the court martial of Lt. Col. Terry Lakin, who refused to obey orders over concerns about the president’s eligibility, the media for the most part refused to cover the issue.

Stars and Stripes, Military.com, WND and a local reporter from Lakin’s home town were at the proceedings, however there was almost no representation by major media outlets.

Many retired officers who come out against the president’s eligibility, such as Maj. Gens. Jerry Curry and Paul Vallely, have also been ignored by media.

Media have also refused to report polls showing many Americans still have doubts about the president’s eligibility.

Just last month, a Democratic polling company’s survey indicated that a majority of Iowa caucus goers still did not believe the president was born in the United States.

Public Polling Policy released the results of a poll conducted Dec. 18, which showed that 52 percent of self-identified caucus goers either did not believe or were not sure the president was born in the U.S.

WND founder and CEO Joseph Farah also has been the subject of a media blackout over the issue.

Farah used to be a frequent guest on cable news shows, however once he made the decision to cover the constitutional issues of a president of the United States possibly being ineligible for the office, he became “persona non grata” on many of the same media outlets. source:
Posted by noachbenavraham at 6:19 AM