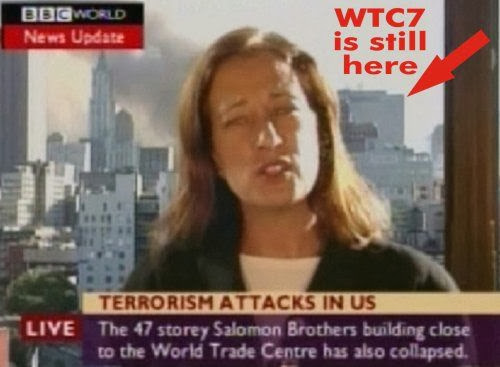 Tony Rooke refused to pay a TV license fee because the BBC intentionally misrepresented facts about the 9/11 attacks, he alleged. It is widely known that the BBC reported the collapse of World Trade Center Building 7 over 20 minutes before it occurred. WTC 7 was a 47-story skyscraper that was not hit by a plane on 9/11 but collapsed at free-fall speed later that day.
So Rooke said the BBC had to have had prior knowledge to a terror attack making them complicit in the attack. He presented the BBC footage to the judge along with a slew of other evidence, and the judge agreed that Rooke had a reasonable case to protest. Rooke was found not guilty and he was not fined for failure to pay the licensing fee.
For all intents and purposes a UK ccourt has just ruled that the BBC was complicit in the september 11th, 2001 attacks in the United States.  Fantastic.  A small victory but a huge symbolic victory and one you would have never otherwised have heard of.  So I suggest to you the reader to get the word out on this one.  Spread it far and wide.  This is big ifonly symbolic. -Mort
source:


Posted by noachbenavraham at 11:50 PM No comments: